Yes kitties, it is too darned cold in Kentucky!!! It was 2 degrees when mom left for work this morning. At least it is sunny outside and we can find some sun puddles in the house to nap in.

Since our last post we can tell you that Johnny's eye has cleared up and he is doing fine.  Fiona's eye looks better, but it still has some redness around the perimeter. She has a follow up appointment with the specialist on Monday, February 3rd.

Mom finally had the new windows installed on January 20th. Most of us hid while the workers were there. It was pretty noisy with them taking the old windows out. The good news is the rooms with the news windows are much warmer now. The bad news is our windowsills are now more narrower. That means it is hard for us to perch in them (or on them).

We were very sad to learn that Prancer Pie crossed the Rainbow Bridge on Friday. We know his family is hurting. 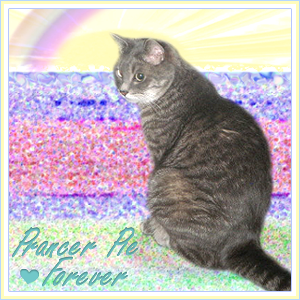 That's it from our neck of the woods. Please stay safe and warm!!!

Oh kitties, we woke up to some fluffy white snow this morning! It wasn't much here, not more than a couple of inches, but it was lovely! We have had flurries come and go all day. We love looking at the snow and are very glad we can watch it from inside. We have noticed a couple of neighborhood kitties who are allowed outside. They are long furred and have put on their warm, winter coats. We wish their people would keep them inside all the same.

Fiona has done well (so far!) when getting her eye drops. Mom just wraps her up like a burrito and covers her head with the blanket until she has the bottle in her hand. After the first drop Fiona gets her head covered again. Mom has to wait a few minutes before she can put the second drop into Fiona's eye. After that, mom covers Fiona's head one more time so Fiona won't start washing her face! Once mom unwraps her from the blanket, Fiona will growl a little until mom puts her back on the floor.

Mom has a 3-day weekend with us since Monday is MLK day. The window people are suppose to be at our house on Monday morning, too. We will have to be confined to bathrooms, a spare room, and possible some carriers while the workers are here. It's going to be noisy and we aren't going to like that one bit!

We hope everyone has a wonderful and relaxing weekend!

Here it is the middle of January and we haven't posted until now. We hope 2014 has gotten off to a good start for everyone.  A lot has been going on at our house.

We were suppose to have new windows installed in the house on January 6, but that was the day the temperature didn't rise above 3F. The installation was moved to January 8, but then postponed again. On that really cold Monday night, water started seeping from the bottom of one of the kitchen walls. The water had to be shut off in the house until a plumber could get there to find the problem and fix it. We couldn't get a plumber at the house until Saturday (January 11).  The plumbing problem wasn't as a bad as it could have been. There was a leak in the bathtub drain/trap. The plumber turned our water back on, but mom couldn't use the shower. The part was replaced on Monday and all is good.

With the water off, mom didn't want to deal with the hassle of workmen in the house installing the windows. She rescheduled a second time. Now the windows are suppose to be installed this coming Monday (January 20). Mom has that day off from work anyway, so that works out well for her.

Our uncle (who shares the house with mom) is having problems with his high blood pressure. Mom had to take him to the emergency room on Tuesday night because he felt very light headed and a little dizzy. Mom said his blood pressure was dangerously high. The doctor finally got his BP down enough for our uncle to come home, but it was still on the high side. Uncle has a follow up appointment with his regular doctor on January 29

And last of all, Johnny and Fiona have both had icky eyes. Johnny is doing much better since he was prescribed an ointment for his conjunctivitis in his right eye. Fiona is a whole other story.

Fiona has only one eye and it has always had some scar tissue on it. It's probably from an eye infection she had as a kitten, long before she joined our family. For some strange reason the blood vessels on her eye are inflamed. Our regular vet prescribed a different type of eye ointment than Johnny's. She also suggested that mom take Fiona to see the ophthalmologist. Mom has been putting the ointment in Fiona's eye since Saturday and there has been no change. The specialist saw Fiona this morning and Fiona's condition even has her stumped! Fiona keeps her eye open while awake, and she does close it when she sleeps. The only time she rubs at it is after the ointment has been applied.

The specialist did not find any scratches or ulcers on the cornea. There was nothing wrong with the inside of Fiona's eye either. She did change Fiona's medicine from the ointment to two different eye drops. Mom will have to put a drop of each medicine in Fiona's eye 3 times each day. Fiona has a follow up appointment in two weeks. Of course if her eye seems worse mom will take her back sooner.

Kitties, this is the strangest thing we've seen. We know Fiona has the feline herpes virus (most of us have it). The vet said it is possible that this is a flair up, although she has not seen it presented this way. Her second thought was it may be something with Fiona's immune system. And her last thought was the possibility of cancer. We aren't exactly sure how old Fiona is, but we think she is around 12.

Would you all please keep Ms. Fiona in your purrs? We want our sisfur to be all better soon!
Posted by Clarissa at 4:00 PM 4 comments: