The Acro-Cats Are In Town!!!


We are so excited, friends!!! Aunty Jen and mom are going to see the Acro-Cats tomorrow night! Mom saw them a couple of years ago when they visited town. She said it was a very cute show, and all of the kitties are adorable. All of the kitties are trained to do simple tricks and encouraged to perform with treats. However, if a particular kitty decides not to perform, that's okay too. None of them are forced to do anything. And the kitties are all rescues. If mom remembers correctly, there is even a chicken and a pet rat in the show!
We hope you like our background with the horses on it. The Kentucky Derby is on May 5, so mom helped us change the background to mark the occasion. We will put something else up after that
Purrs and prayers for any fur or family that needs them. We love you!
Posted by Clarissa at 8:23 AM 4 comments:

Good morning! We are back. Mom has been busy and we haven't had much computer time. She took an overnight trip to Nashville, TN last week for some movie thing. We can't begin to explain it, but she got to meet Darren Lynn Bousman. He is a movie director and he is probably best none for some of the SAW horror movies. Mom hasn't seen those and doesn't plan to see them. But she said he was very nice and very funny. Then she took off for Virginia Beach for the weekend to go to a horror movie convention with a friend of hers. Her friend had two media passes and needed someone to go with her to operate the video camera while she did a few interviews. It was really more of mom's friend's thing than mom's. Anyway, she got home late Sunday night, then had to be at work yesterday.

Jazzpurr asked me to thank you all for your purrs. She is back to normal, although she has decided not to sleep on mom's bed. Jazzy is out and about, but she isn't having much to do with mom now. Mom thinks Jazzy is afraid that she will get scooped up and taken back to the vet. Fred and Lily had appointments with the vet for their distemper shots. Lily is doing quite well since she had her ear surgery in October 2010. She hasn't had any more problems with her ear and abscesses forming. Her weight is holding at 12 lbs. and she is healthy. Fred has gained about 1/4 of a pound since last fall. He now weighs just a bit over 7 lbs. A little thin for his size, but better than he had been. His appetite is still good and his mouth doesn't seem to be bothering him. Fred has lost about six teeth since his last visit. He has chronic gingivitis and should probably have his teeth extracted, but due to his kidney issues, the vet (and mom) said putting him under anesthesia isn't a great idea. He was on a round of antibiotics to help with some minor redness and to keeping infection at bay.
I (Clarissa) finished my round of predisone for my skin irritation and over-grooming issue. I'm doing much better for now. I can't have more steroid injections since I had that cyst develop from the last one.
Lastly, we lost two dear furriends yesterday. Bendy Furr lost his fight after a brief illness. He had been our friend on Meowmail Forum for a long time. His mom does a lot of work with foster kitties, and she adopts those kitties with health issues or special needs that are usually considered unadoptable. We know she will miss her Bendikins as much as we will. Bendy got his name from his very bowed front legs. He had casts on his little legs as a kitten to help straighten them. 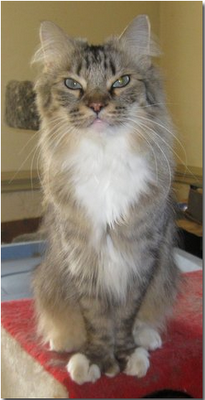 Our Aunty Jen's kitty, Willow, crossed the Bridge last night. Willow had taken up residence in the basement because she decided she didn't want to be around the other kitties at her home. Her momma couldn't find her at dinner time and went looking for her. Willow was laying under a table and Aunty Jen thought she had already left. But Ms. Willow hung on a while longer. Aunty Jen was able to bring her upstairs and lay her on a blankie and stroke her furs and talk to her until she closed her eyes and left this world for her new home. Our mom hadn't seen Willow for a long time, but she remembers when Aunty Jen brought her home as a kitten. She was the cutest thing, all tabby and torbie and oh so fierce...until you held her on her back a rubbed her belly. Then she would fall fast asleep. Ms. Willow was 14 years old. Unfortunately, we don't have a picture of Willow to share with you.
We hope all of our friends and family in the blogosphere are happy and healthy!
Posted by Clarissa at 10:16 AM 5 comments:

Jazzpurr normally sleeps on the foot of mom's bed. That is her spot of choice. She has been MIA for three days (as of this morning). Mom finally found her curled up in a cat bed that is under a table in the corner of the family room. Jazzpurr let mom pick her up without a struggle. Jazzy's little ears were really hot, and mom said Jazzy sounded very congested.

Mom popped Jazzy into a carrier right away and then called the vet. She was able to get an 8:30 a.m. appointment. Turns out that Jazzy has an upper respiratory infection. Her temp was just a hair over 104. The vet gave her a shot of covinia (?) and suggested powdered lysine to be added to Jazzy's food.

Hopefully Jazzy will be feeling better in a day or two, but if you could spare a purr for her it would be appreciated!

Guess what mom saw in our neighborhood last night? Oh, I guess the post title gave it away. It's true though. She saw a turkey vulture down the street from our house. She was almost home from work when she spotted this large bird with a bright red head in the distance. At first she thought it might be a wild turkey (we had one of those show up in our backyard back when it was only me and Sable in the house). Anymew, she remembered that the wild turkey she saw had a blue head, not a red head. As she got a bit closer she realized that it was a big ol' turkey vulture. Mom said it's the first time she has seen one so closely in the wild. There are a lot of possums in our neighborhood, and they aren't too smart when it comes to crossing the road. And turkey vultures eat deceased animals. I will just leave it at that. Mom didn't get a picture of the vulture, but here is one I found on the interwebs: 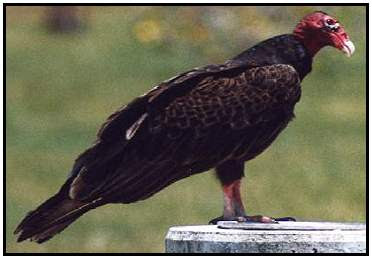 It's a rather magnificent bird in it's own way. And quite large, indeed. What surprised mom so much about see the vulture is where she saw it. We live in a residential neighborhood. Not in a rural area at all. But there are hawks, and occasional owl, and raccoons in the neighborhood, too. And bunnies...lots of bunnies. And squirrels. And chipmunks. What is the most unusual critter you or your parents have seen in your neighborhood or yard?
Posted by Clarissa at 7:57 AM 6 comments:

Clarissa here this morning. I've taken over "Mancat Monday" today. We hope those who celebrated Easter had a wonderful day. And for our friends, who celebrate Passover, we hope their holiday is fantastic.

First the mom report. She is sore. Mom spent the weekend "downsizing" the house and cleaning. She's barely made a drop in the bucket. It will be a slow process, but she is determined to clear out things she doesn't use, clothing she never wears, etc. However, mom said her body, especially her knees, are killing her now. She is an official "geezer".

I had to go to the vet on Saturday morning. Not a good way to start any day in my book. I've mentioned before that I will groom my tummy until it is raw. I've done that again and my upper lip has been swollen for a couple of weeks. It hasn't been bothering me, but it hasn't gotten any better. Turns out I have a rodent ulcer on my lip. And it is probably tied into the whole over-grooming thing. The vet says it is an allergy issue. Since I can't have any more steroid injections (the last one caused a cyst to form) I am now on Predisone. I have to take it twice a day for 7 days, the once a day for 7 days, then every other day for 7 days. Since we don't know what I'm allergic to, mom may try some different foods.

Mom here: Rissa started chewing at her belly until it was raw back in 2004, shortly before my dad died. She was four years old. I thought it was stress related due to him being ill. However, it continued until our vet finally tried the Depo injects. Those worked just fine for about 12-16 weeks, then it would start over again. The last injection she received was in August 2011. That one resulted in the cyst forming on her side. I had the cyst removed - it was benign - but then her incision got infected. No more injections for Rissa.

I tried the venison and green peas prescription food (I don't remember the brand) and she refused to eat it. Currently, the cats are eating Nine Lives Plus. Fred is on a prescription food due to his kidney issues.
Posted by Clarissa at 8:11 AM 4 comments:

We have friends all over the world, so today we are going to introduce you to Dante. Dante's momma, Carrie-Anne, is a good friend of our mom's. We know we we never meet Dante in catson (that's like "in person" for cats!) but mom says one day she will make it to England. She hopes she'll get to meet Dante then. Carrie-Anne is a HUGE fan of Alice Cooper, just like our mom. That's how they know each other. Carrie-Ann has been to the USA lots of times and mom gets to see her every December in Phoenix, AZ.

So without further ado, here is the very handsome Dante: 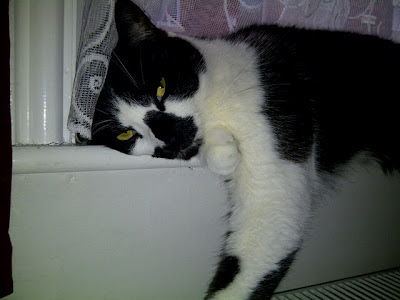