Everyone's purrs and prayers and positive thoughts seem to be working! Johnny saw the vet again yesterday. He has gained another half pound! This makes us all so happy. The vet said he looks good and that even his fur looked better.

Mom managed to steal some of his poop on Saturday morning. She took it to the vet that same morning so she could look for anything nasty or something that just shouldn't be there. Nothing to report in the poop department. It was normal.

The plan of action is for Johnny to continue taking the antibiotics for three more weeks, along with the supplement. He will go back on or around March 21 for another weight check. Of course, if he starts slipping or something is amiss with him, he will go back sooner. The vet said the supplement is something Johnny will be taking for the rest of his life.

Keep your paws crossed that Johnny continues to gain weight and improve. Also keep your paws crossed that the rest of us stay healthy. Mom said that been Daisy's dental surgery and Johnny's illness she has spent about $4000. She is seriously considering a "Go Fund Me" page to help cover the vet bills. She said she hates to do that though because we are her responsibility, not someone elses.

Thank you all for your words of encouragement. Mom dropped Johnny off at the vet's this morning for his ultrasound. She would have liked to have been there with him, but it was scheduled for the same time as her appointment with the eye doctor.

Overall Johnny's results are good. His liver looks good. The vet said this something small on what would be considered his appendix. It could be something or it could be nothing. The only way to know for sure would require a biopsy. She said she did not recommend doing that at this time. We will continue monitoring him for the time being.

Dr. Green said that Johnny has gained 8 oz.! That is a half-pound!!! Considering that he lost 1.5 lbs. in 4 weeks, that was great news. Johnny will continue taking the medicines that were prescribed on February 4th. He will finish out the antibiotics and the supplement. Dr. Green wants to see Johnny in a week to check his weight again. She also told mom that she would really like to have a stool sample from Johnny. That would allow her to check for anything nasty in his gut. Mom will have to isolate Johnny in a room by himself in order to do that. With 14 of us it would be impossible to determine whose poop she is stealing from the litter box!

That's all we have for now. Thanks again for everyone's support. Keep Johnny in your purrs for continued improvement!

Wow! It's already mid-February! It hasn't felt much like winter in Louisville, Kentucky. The temps seem to be warmer than usual for winter. There hasn't been any measurable snow here either. We think most of it has gone north of us. According to the news it looks like the northeast has gotten more snow than they want!

What we have had is rain. Although it is sunny today, we've had a lot of rain this winter. Mom said she'd rather have rain or snow, but not that stuff that falls in between: sleet and/or freezing rain. According to mom, when there is snow she can still get traction on the road when she drives. Not so much when there is ice on the roads. Since we don't drive we have to take her word for it.

Mom had a follow-up appointment with her surgeon at the end of January. Her wrist and arm are healing nicely now and she has been released from his care. The incision on her palm and wrist are barely noticeable now. However the incisions on her arm, especially the one on the outside of her arm, have left ugly scars. She is hoping they will fade with time.

Daisy has recovered from her dental extraction. In case you've forgotten, she had most of her teeth taken out at the beginning of January. She still has her bottom fangs. Since she finished her post-surgery antibiotics her breath no longer smells like something crawled into her mouth and died. And that, friends, is a good thing!

Brother Johnny has been under the weather. He and Cash had their annual exam at the end of December. Johnny had lost almost 3 lbs. and weighed just under 11 lbs. The vet suggested that Johnny have a blood panel ran. The vet called the following day and said everything looked good and to monitor Johnny.

Mom kept an eye on him. His appetite was good but he continued to lose weight. Mom took Johnny back to the vet on February 4th. He had lost another 1.5 lbs in a month's time. That put him down to 9.5 lbs. He was getting too thin through his hindquarters.

The vet felt around on Johnny, and listened to his heart and lungs. She said she didn't feel anything unusual and his heart and lungs sounded great. Mom mentioned a possible thyroid issue so the vet pulled out Johnny's lab results. She said that two different thyroid tests had be ran and they were fine. HOWEVER, his cholesterol and BUN were both low. She said that could indicate a problem with Johnny's liver.

The vet who saw Johnny and Cash in December was a substitute vet. Our regular vets (they are a husband/wife team) were on vacation. The substitute vet never said anything about Johnny's low cholesterol and low BUN! Mom was not happy and let our regular vet know this.

Our regular vet said she thought it best to redo Johnny's lab work. She would have the lab add another type of test for any thyroid issues. She also wanted to run a urinalysis. More blood was taken for the lab. Mom dropped Johnny off at the vet's office when she was on her way to work on the following Monday. She was going to leave him for the day so they could get a urine sample from him. Johnny's bladder said it wasn't giving up anything for them! He ended up spending the night and they got the needed sample the next morning.

(1) The urinalysis showed a bad UTI. Lots of bacteria and some blood in his urine. That in itself is enough to make Johnny feel bad.

(2) The blood work results were the same as the December results. Everything was fine, including his thyroid. However, the his cholesterol and BUN were still low.

For the past week Johnny has been on three medications. He has two different antibiotics that he gets twice each day. They will take care of his UTI and any infection that he might have in is liver. He also is getting a supplement once a day that is for liver support. Mom tried giving him the pills in those pill pocket treats. He took them the first two times. Then he figured it out! Now mom has to actually pill him. He does pretty well and he gets a couple of treats when she is done.

Johnny has a follow-up appointment tomorrow. He will have a weight check (mom said it appears that he has gained a little weight) and he is going to have an ultrasound done. The ultrasound is the best way to actually see if there is anything wrong with his liver (too large, too small, any growths or tumors around it). We will let you know what mom finds out.

Not long ago I mentioned mom's friend who had two kitties cross the Bridge within a week or two of each other. That left her other "old man" cat, Fritz, alone. He was missing his buddies. Well, I have some happy news for you. She has adopted two kitties from the Goat House Refuge in Pittsboro, NC.

Regan is white with black markings. He is settling in nicely and likes to play with the red dot! 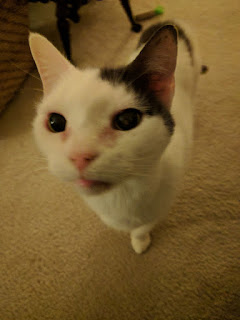 The other kitty is Molly. She is an orange beauty who is blind in one eye. Aunty Krista has already shared pics of Miss Molly stretched out snoozing on her bed. I don't have a picture of that scene, but I do have one of her pretty face. 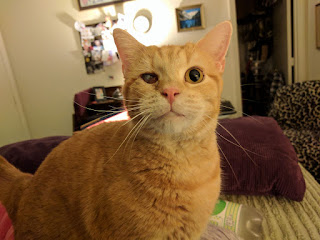 I'm not sure how old either of these new babies are, but I think they may be young adults.

If any of our friends are in the Raleigh-Durham area and are looking for a kitty or three, send them to the Goat House Refuge in Pittsboro, NC.  It is a no-kill facility and they always have lots of kitties ready for adoption.

Have a great weekend!