We have two new additions to the horde at my house. Their names are Johnny and Cash (they were already named) and they joined us on Wednesday night. These guys are All-American Tabby brothers. I was told that they are six years old.

Here is how they came to me:  My friend needed a ride to her vet's office on Wednesday evening. Her car had broken down and one of her kitty's had a 6pm appointment. I agreed to give her ride in the nasty, pouring rain. While we were waiting, a young couple came in with their little girl. Each adult had a large tabby in their arms. The woman was in tears. They wanted to surrender the cats to the vet's office! From what I overheard they had fallen on some financial hard times and were now staying in a place where they couldn't have their cats. Unfortunately the office did not take surrendered animals. If they were turned over to animal control their chances of survival would be slim to none. I don't know how they would fare with the local humane society either. It was obvious that these boys were well taken care of and loved. So I did the only thing I could do: I brought them home with me.

They had their vet visit on Saturday and came out with a clean bill of health. We discovered that Cash has broken the tip off of his upper left fang. The vet said it appeared to be an old injury. It doesn't appear to bother him but I will keep an eye on his eating habits. They were both vaccinated while at the vet's and they both received claw trims. Also, they were already neutered. Johnny was anxious at the office and he started panting. I've never had a cat that reacted that way before.

Johnny and Cash are out and about with the other cats. Cash is pretty laid back about the arrangement. He has discovered the top of the cat trees and a windowsill that gets a lot of morning sun. He also seems to have a favorite chair in the living room. Johnny is a little more cautious. He isn't growling like he first did and I hope he will relax more as he gets use to his new home. He is more of an explorer and has managed to get on top of the refrigerator and tried to get into one of the kitchen cabinets. I've caught him on top of the stove a couple of times and made him get down. That is one place he is not allowed.

Without further ado, here are Johnny and Cash! 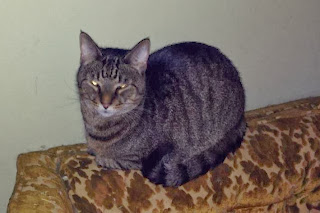 This is handsome Cash! Although you can't tell it in these pictures, Cash has beautiful green eyes. He is longer than Johnny and he weighed in at 12 lbs. 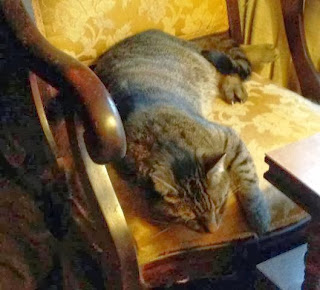 Cash has picked out this chair as one of his favorite places to sleep. Look at those big back feet! 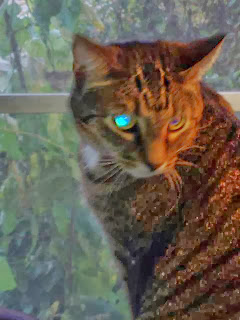 This is golden eyed Johnny. He is a little shorter in length and little stockier. He weighed in at 14 lbs. 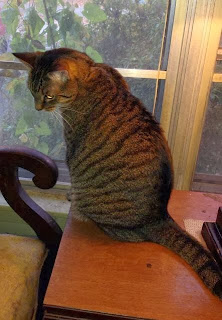 Another picture of Johnny. I put a collar on him to help tell them apart. I'm wondering if he wore one before. He didn't put up a fuss about and he has not tried to take if off.

They are already stealing my heart.
Posted by Clarissa at 1:09 PM 7 comments: