And Then There Were 7: RIP Ginger

It is with a heavy heart that we share the sad news regarding Ginger. Our sweet sisfur crossed the Rainbow Bridge on Tuesday, February 18. She had kidney disease. Even with prescription food she could not fight it any longer.

Ginger was one of the five cats mom brought home from Cleveland, Ohio. Mom's friend told her about them. They lady who had them was selling her house and moving into her boyfriend's house. He didn't want the cats, so she got rid of them. Mom said she would be getting rid of him if it were her.

Ginger, Panda, Puff, and Spunky were littermates. Batman was a year older than them and not related. Mom was going to take Ginger and Spunky only. They were a bonded pair and they had to go together. Then mom said they couldn't find a home for Puff, so she said she would take him. Then there were some red flags going on regarding the foster home that Panda and Batman were going to. So...that's how mom ended up with five adult cats!

Panda crossed the Rainbow Bridge in April 2013. Her kidneys gave out. Spunky passed in October 2017. He had cancer. Puff crossed last year. He also had cancer. And now Ginger has joined them. Batman passed in June 2018. He had saddle thrombosis and lost the use of his back legs. The Cleveland Crew are back together again.

Mom and her brother are having some hard times. If your parents pray, ask them to send a prayer for our household. They are determined they will do whatever it takes to keep the house. I can't go into the mess mom has gotten into, but she is doing the best she can to try to make it right.

We love you all!! 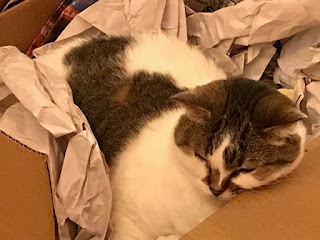 Ginger in her box. 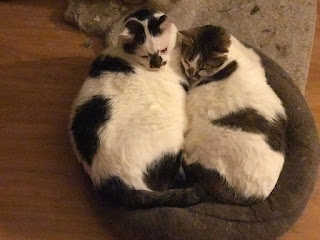