And there were 7: RIP Sable

It is with a heavy heart that I must share the sad news of Sable's passing. Sable crossed the Bridge on Tuesday, June 4, 2019. Mom held him through the entire procedure.

Sable joined our family on October 18, 2001 as a "free kitten." Two little girls were trying to find a home for him (his siblings had found homes.) Although mom wasn't looking for another kitty, she felt like she needed to take him. It was getting close to Halloween and Sable was solid black; those two things can end up badly. Mom got a box from the store and put Sable in it. She placed the box on the passenger seat and by the time she walked around the car to get into the driver's seat, Sable was already out of the box and sitting on the dashboard!

Although Sable was a "mama's boy," he would nap with her dad in the afternoon. He would sleep with mom at night and wake her up with his his meowing and poking her with a paw. Over the past year he had started sleeping on mom's head. Seriously. She would get in bed, get comfortable as a side sleeper, and Sable would curl up on her head/face. She always had her blanket over her head when Sable would do this.

Mom knew Sable's health was failing. His kidneys were going bad, his coat wasn't as shiny as it used to be, and he slept more and more. Mom found Sable in the kitchen late in the afternoon on June 4. He was facing the wall between the washing machine and the garbage can. Sable was meowing, but it was a different sound than his normal meow. He would take a few steps forward and bump the wall, the back up and do it again. His hind quarters were slumped and his feet were sliding when he walked.

Mom called the vet's office and told the she thought it might be time to say farewell to Sable. She and her brother went to the vet's office. Sable struggled when mom was wrapping him a bath towel. He eventually worked himself out and pooped on the floor of the SUV. While waiting for the vet to come into the exam room mom noticed that Sable's eyes were 100% dilated. Dr. S. watched Sable attempt to walk (the slipping of his back feet continued). When he sat down, she moved her hand in front of his eyes. There was no reaction. Sable was now blind. That explained the distressed meows and the walking into the wall. It was time to say goodbye.

Sable's loss has hit mom every bit as hard as mine did. She had raised both of use from kittenhood.

Ann from Zoolatry sent mom this beautiful memorial. Please feel free to share it if you want. 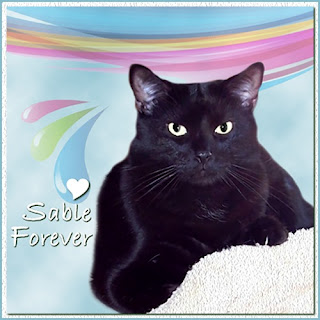